Okay so I’m getting pretty agitated because there are people [still] out there, very misinformed ones, who think the Trump Administration is not responsible for anything. Worst part?

“I take no responsibility for that.” -DT, in the context of not having literally anything we need.

He’s right on board with ’em. So, this one’s for YOU all.

First, China obviously screwed up. You saying that as the reason why Trump isn’t responsible for anything doesn’t make you sound like you know what you’re talking about.

Understand this: We’ve known about this fucking virus since mid-January and our, I’m sorry, HIS response was, well, OBVIOUSLY ineffective. You know what else is ineffective? Every public health effort that the Trump administration has demolished.

ONE: The United States needs to restart and expand the U.S. Agency for International Development’s PREDICT program, which the Trump administration ordered shut down in October of 2019. This program tracked early stage viruses and diseases all over the world, so scientists in the United States would have a head start in understanding pathogens that could eventually reach U.S. When it was in operation, PREDICT collected more than 100,000 samples and found nearly 1,000 new viruses, including a new Ebola virus.

I have a great understanding of PREDICT’s importance in preventing emergence and reemergence of zoonoses as well as the implications of defunding it because in Bolivia I met, and have remained in frequent contact with, the Bolivian rep of that exact project. In fact – I wrote about it in my paper for NIH, & here’s a piece of it:

“PREDICT had created an extensive transdisciplinary network of One Health professionals with partners in over 30 countries, training over 6,000 people in biosafety, field epidemiology and surveillance, laboratory diagnostics, and social and behavioral sciences, and modeling and analytics.26 The program strengthened the zoonotic disease detection capabilities of laboratory system in over 60 labs globally, detecting over 1,000 viruses (931 novel & 218 known), including Bombali- and Zaire ebolavirus, Marburg virus, and MERS- and SARS-like coronaviruses.28

In the context of Bolivia:

In 2012, PREDICT was integral preventing a potential yellow fever outbreak, when six dead Red Howler Monkeys were found at Ambue Ari Wildlife Refuge Park. After the viral stains confirmed it was YF, A public health response was immediately mobilized in the region and ultimately no human cases were reported. This suggests that local laboratory capacity and transdisciplinary collaboration plays an integral role in preventing human cases and ultimately disease outbreak.29″

TWO: U.S. – Chinese public health collaboration against infectious disease, that is now in shambles thanks to our administration not valuing global disease prevention, has proved immensely effective in the past. In 2002, when SARS hit southern China, the Bush administration played a crucial role in Beijing’s response. American scientists collaborated with their Chinese colleagues to create records, contact trace, proper isolation, etc – and as a result, SARS was largely contained to Asia.

*Only 27 Americans were infected; none died.

“The lesson of this plague isn’t that America should stop cooperating with China. It’s that America must rebuild the public-health cooperation that the Trump administration helped destroy.”

FOUR: Trump administration tried to cut the CDC budget – but failed. [[the attempt was made]] – which is what is most telling here. Regardless, budgets for emerging zoonotic diseases at the CDC have consistently decreased. (refer to the attachment) 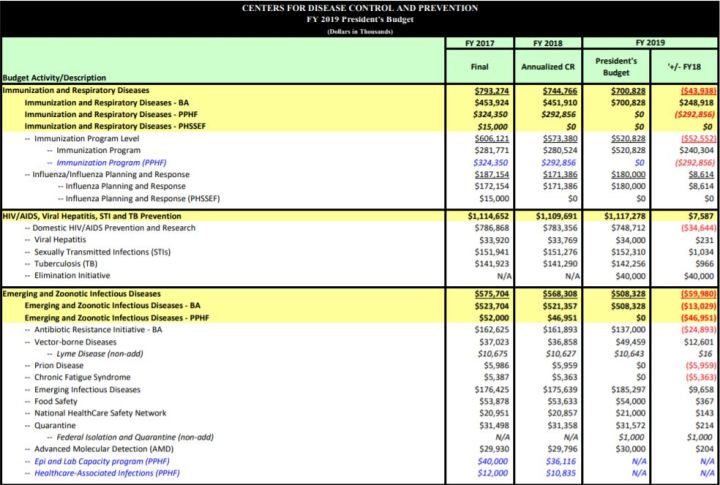 It’s funny when people try to bash Obama like he didn’t do anything ever. Well, here’s something he did – establish anti-pandemic programs in 47 countries.

Here’s something you can look at – the GHSA, est. 2014. (fyi that wasn’t during Trump’s presidency lol) But thank God it still exists. https://ghsagenda.org/

Trump chooses to attack the Obama administration saying their response to the H1N1 swine flu outbreak was a “full scale disaster”.

His insecurities are precious.

Even the CDC director is like: the regulatory change was related to “laboratory developed tests” (those that are designed, manufactured and performed in the same place (i.e. hospital/institution) – these tests differ from the ones that the CDC developed and are sending to public health labs. Trump, with his fingers in his ears, is like, “ItS oBaMaS fAuLt.

Let’s reflect our COVID timeline, shall we?

# Cases February 27: 59
Trump response on Feb 27: “one day, like a miracle, it’ll disappear”
# Cases on March 12: 987
*Trump European travel ban* (what was your rush LOL – not)
Cases on March 13: 1,264
Fauci on March 13th: “lack of testing was a fact of failing”
Trump: “I take no responsibility for that”
March 21 – present:
HC professionals: HELLO WE NEED PPE AND RESPIRATORS AND
Fauci: *refutes Trump’s denial of medical supply shortage*
The EXPERT in infectious disease is even human enough to be real with us. Meanwhile, this fucking fool is literally like, “I would love to have the country opened up and just raring to go by Easter”

IF FAUCI DOESN’T KNOW, THEN YOU DON’T KNOW.

NOT collaborating with other countries puts us all at risk. This is a concept that the air-headed administration fails to understand and thus fails to value. Meanwhile, we are ranked FIRST in our military budget. Like beyond first. Like so fucking disgustingly much more than anyone else – GO. FIGURE.

Can you say, priorities? I hope our military can kill this fucking virus ok. Definitely not our public health experts. . .uh. . .

Look! An NIH publication that literally has a subheading that says:

In CAPS – it’s literally screaming at us.

They don’t take years off.

The next one is coming.

Time to wake up.